Dr. Lejeune of Paris, France, was a physician, pro-life pediatrician and Doctor of Science and Professor of Genetics for 25 years. Dr. Lejeune discovered the genetic cause for Down’s Syndrome,    best known for his discovery of the link of diseases to chromosome abnormalities. He developed the karyotype (Karyotypes describe the number of chromosomes, and what they look like under a light microscope).  He had made his career specializing in the treatment of children with Trisomy 21, also called Down Syndrome. He also diagnosed the first case of Cri du Chat syndrome, 5p deletion syndrome or Cat cry syndrome and so named because of the distinctive cry in infancy that resembles the mewing of a cat in 1963.

What is Cri du Chat Syndrome?

Cri du Chat syndrome (CDCS) refers to a unique combination of physical and mental characteristics associated with a loss of genetic material on the distal short arm of the fifth chromosome. Also called 5p- syndrome, 5p monosomy, or Cat Cry syndrome. Cri Du Chat  is a rare chromosome disorder affecting approx 1 in 37,000-50,000 live births. The syndrome is known to result from a deletion in the short arm of chromosome 5 and represents one of the most common deletion syndromes in humans. This condition is found in people of all ethnic backgrounds and is slightly more common in females.

They result from a chromosomal deletion that occurs as a random event during the formation of reproductive cells (eggs or sperm) or in early fetal development. Humans usually have 23 pairs of chromosomes in each cell of their body. These are named in pairs 1,2,3,4,5,6 etc. A chromosome consists of smaller components called genes which contain instructions in a code made up of proteins. This code contains the plans or blueprint for each human being. When something goes wrong with the chromosome in the process of creating a new human being, the code cannot be read properly and the child’s body and brain may not develop correctly. When a problem results from this genetic mistake it is called a genetic disorder.

Cri du chat syndrome is a genetic disorder; it is not an illness or a disease therefore there is no cure. A child born with this disorder has specific physiological problems which can result in their development being delayed both physically and intellectually. They may also have health problems because parts of their physiology have not developed correctly. Remember, nothing the parents have done has caused this deletion to occur.

Affected people typically have no history of the disorder in their family but there is a small percentage that can be carriers. The size of the deletion varies among affected individuals; studies suggest that larger deletions tend to result in more severe intellectual disability and developmental delay than smaller deletions in people with cri-du-chat syndrome.

Most common symptoms of Cri du Chat are:  Feeding problems because of difficulty swallowing and sucking accompanied by low birth weight and poor growth. Laryngeal structural differences, microcephaly (smaller than normal head), hypotonia (low muscle tone),  hypertelorism with the eyes (abnormally increased distance between two organs or body parts), epicanthic fold (a skin fold of the upper eye lid, covering the inner corner of the eye), down slanting palpebral fissure (separation between the upper and lower eyelids), gastroesophageal reflux, constipation, respiratory complications, scoliosis (curvature of the spine),  strabismus (a condition in which the eyes are not properly aligned with each other), flat nasal bridge, down turned mouth, micrognathism (undersized jaw), low set ears, single palmar crease (single crease that extends across the palm of the hand), frequent sinus, ear and respiratory infections and cardiac defects.

There are more severe yet less common symptoms if you would like more detailed information click here. Cri du Chat ABC Booklet  (it takes a moment to load)

Individuals with Cri du Chat Syndrome have to overcome alot of challenges but with the right intervention and support can live happy
healthy lives.
New research on the Gene CTNND2

The CTNND2 gene provides instructions for making a protein called delta-catenin. This protein is active in the nervous system, where it likely helps cells stick together (cell adhesion) and plays a role in cell movement. In the developing brain, it may help guide nerve cells to their proper positions as part of a process known as neuronal migration. In mature nerve cells, delta-catenin is located in specialized outgrowths called dendrites. Dendrites branch out from the cell and receive information from nearby nerve cells. This information is relayed across synapses, which are junctions between ner

ve cells where cell-to-cell communication occurs. Delta-catenin appears to play a crucial role in the function of synapses.

The CTNND2 gene is located in a region of chromosome 5 that is often deleted in people with cri-du-chat syndrome. As a result of this deletion, many people with this condition are missing o 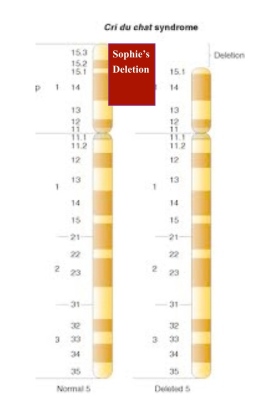 Sophie’s deletion is quite large, she has a heterozygous deletion which starts at bands p13.3-p (highlighted in red)  and extends to the rest of the chromosome with a 32.42 megabase deletion.

Which is easier to say about 75% of her short arm is missing.  According to the geneticist’s she should not be functioning the way she is with a deletion this size and her health history.

Doctors are amazed at her progress!

Doctors only know so much. Had I given up hope when we were told she would most likely not survive and if she did she would not have the capacity to function I know we would where we are at today, fighting to overcome and learn everyday.

Then your light shall break forth like the morning,

Your healing shall spring forth speedily,

And your righteousness shall go before you;

The glory of the LORD shall be your rear guard. 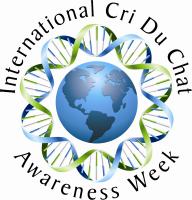 A meeting was held quite far from earth "It's time again for another birth, Said the Angels to the Lord above, "This special child will need much love." "Her progress may seem very slow Accomplishments she may not show And she'll require extra care From the folks she will meet down there. She may not run or laugh or play Her thoughts may seem quite far away In many ways she won't adapt And she will be known as handicapped. So let's be careful where she is sent We want her life to be content Please Lord, find the parents who Will do a special job for You. They will not realize right away The leading role they're asked to play But with this child sent from above Comes stronger faith and richer love And soon they'll know the privilege given In caring for this gift from Heaven Their precious charge, so meek and mild, Is Heaven's very special child." By Edna Massimilla of Hatboro, Pa 19040

Walk Beside Me Hold My Hand

Oh, please don't walk in front of me. It's hard to follow all you do. I need some guidance constantly, And depend... alot on you. Perhaps my progress may be slow. Perhaps I'll need some extra care. With faith, I'm sure you'll get to know. There are blessings we can share. And, please don't walk in back of me. Don't push me quickly on my way. I need your patience, and I plea That you'll teach me what to say I may be known as handicapped. Some folks may say I'm just "not right" And though I often don't adapt, Angels keep me in their sight. So, please except me... this I ask, Although I'm different than the rest. The Lord has given me a task, And with childlike faith... I'm blest. Such peace of mind can stir much love Somehow my innocence was planned I'm on a mission from above WALK BESIDE ME ~ HOLD MY HAND By Edna Massimilla (c) 2001 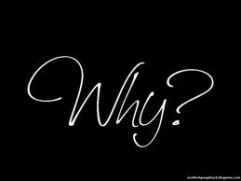 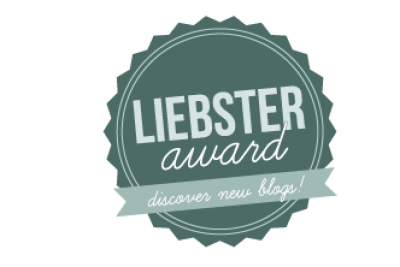